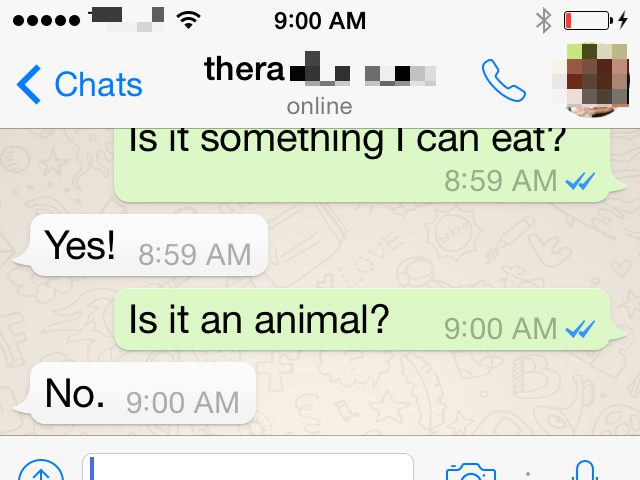 In the year 2018 smart phones have become more powerful than ever before.

It’s possible to play some really good graphically advanced games on mobile devices now. Every day, more 3-D games come out for cell phones and game engines like Unity and Unreal make it a lot easier to program for Android as well as iPhone.

But back in the day, there was a time when you couldn’t even play 2-D games on the cell phone. This is a time when SMS text games were actually what people played. If you’re a little bit older, it might be middle school for you when this was going on. Or you might have come in contact with it when you didn’t have a brand-new super fancy phone and you had one of the older, dumber phones. Even the dumbest cell phones for the longest time had at least, text messaging service.

The first of the games is called 20 questions.

20 questions is a 19th century game, commonly called a parlor game at the time. This was before radio and television were around. It’s basically a game of deductive detective work. You get rewarded for being creative, especially can think quickly. One person has to choose an object or person and the other person has to guess what that object or person is in 20 questions or less. As soon as the first person has the subject, they let the other player now and the other player sends their questions via text message. Eventually, this will narrow things down there a series of yes or no answers.

As an example, say you take Brad Pitt as your subject. The opposite player might ask us the subject is an animal. You would respond that it is not and then they would ask is it a human being? You would simply respond with a yes. You can probably see where we go from there, they might ask of their famous, their male or female, if they’re alive or dead. Brad Pitt is probably way too easy. Wouldn’t think that would be a good starting subject.

Would you rather is another game you can actually play over SMS. It’s basically a game that, if you haven’t played before, is based on moral and ethical questions. Basically, you’ll be presented with a dilemma that you probably won’t come into contact with on a day-to-day basis. The first person asks would you rather followed by two different hypotheticals. The two different concepts could be closely related, or they could be very distinct. They should both carry equal weight, however. That makes the game fun. Normally, both scenarios are uncomfortable and probably a little bit scary.

There’s one good example of this. Would you rather fight one hundred mouse sized bears or one bear sized mouse?

FraischeGames games have no microtransactions. Check us out on Google Play.

I’m currently working on some defense games for Android so check back for more on that,too.